Climate Change, 5G and the Internet of Things

The unbridled energy consumption of our wireless revolution, 4G, 5G and the Internet of things is contributing to climate change.

5G requires millions of new cellular antennas called “small cells” -basically shorter cell towers- to be built in neighborhoods directly in front of our homes. These 5G antennas are to connect with billions of new wirelessly connected “smart” devices referred to as the Internet of Things (IOT).

David Bruno, an expert in electromagnetic pollution, obtained a document from the National Frequencies Authority (ANFR) concerning the installation of an Orange relay antenna site in Marseille. According to him, “the colossal power of 5G antennas is to be feared”. He analyzed the Orange document and found the 5G relay antennas in the 3400 to 3800 MHz band will by themselves emit electromagnetic radiation twice as strong as the sum of the relay antennas of 2G, 3G and 4G technologies combined and in the near future, people living near relay antennas will be exposed to power density levels in W / m², at least 3 times higher than those of today.” 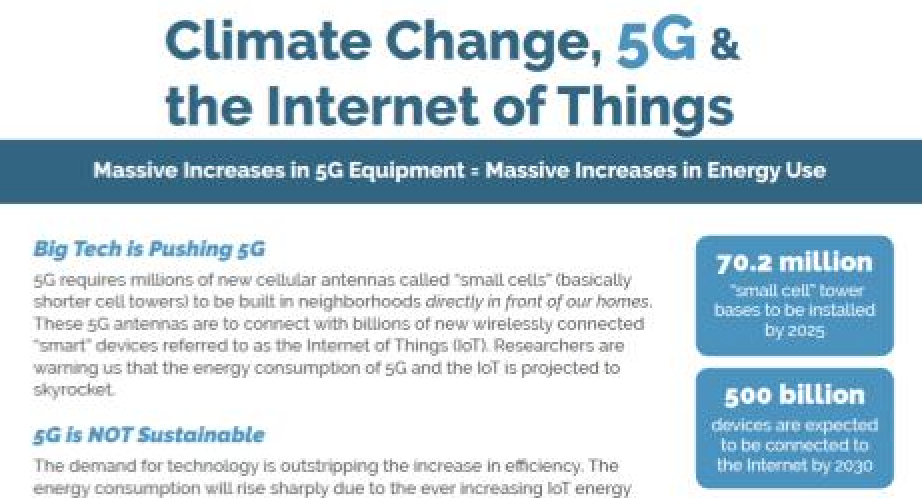 Researchers are warning us that the energy consumption of 5G and the IOT is growing and projected to skyrocket.

5G is NOT Sustainable

The demand for technology is outstripping the increase in efficiency.  The energy consumption will rise sharply due to the ever increasing IOT energy demands at every stage of the lifecycle of 5G equipment, from device manufacture to data centers to data transmissions, and networks.

In economics, the Jevons Paradox is when technological progress increases the efficiency with which a resource is used, however demand and consumption increase as well. Thus- the end result is overall increased use of the resource, despite efficiency gains.

5G is an Energy Hog

-IEEE Spectrum, 5G’s Waveform Is a Battery VampireA typical 5G base station consumes up to twice or more the power of a 4G base station, according to a new report entitled “Operators facing power cost crunch.”  Energy costs can grow even more at higher frequencies,  in order to fuel the higher number of antennas and the denser layer of small cells. In addition, edge compute facilities needed to support local processing and new internet of things (IoT) services will add to the overall network power usage. Although exact estimates differ by source,  MTN says the industry consensus is that 5G will double to triple energy consumption for mobile operators, once networks scale.This 5G energy report was featured in an article by Fierce Wireless entitled “5G base stations use a lot more energy than 4G base stations: MTN“

We Must Consider the Environmental Footprint of the Digital Ecosystem.

“Behind each byte we have mining and metal processing, oil extraction and petrochemicals, manufacturing and intermediate transports, public works (to bury the cables) and power generation with coal and gas. As a result, the carbon footprint of the global digital system is already 4% of the global greenhouse gas emissions, and it’s energy consumption rises by 9% per year.”

“The electromagnetic radiation standards used by the Federal Communications Commission (FCC) continue to be based on thermal heating, a criterion now nearly 30 years out of date and inapplicable today.” -The Department of Interior in a 2014 letter on the impact of cell towers on migratory birds.

EHT has a compendium of research on impacts to trees, bees and birds here.

Damage to the Tree Canopy

Trees play a vital role in mitigating climate change, sequestering millions of tons of carbon that would otherwise pollute our climate. The installation of 5G  equipment often requires heavy pruning and digging. This will clearly impact the canopy and root system of our trees. Read the Sierra Clubs testimony to Washington DC about the impact to trees from the 5G small cell deployment.

All things wireless is NOT the answer.

“Wireless devices, antenna networks and data centers are consuming an ever- increasing portion of the global energy supply, based largely on coal…”

-“Re-Inventing Wires: The Future of Landlines and Networks”

According to the Centre for Energy Efficient Telecommunications;

Wireless devices use energy even when you are not using them- in standby mode.

Download and share our Factsheet on 5G, Energy Consumption and Climate Change here. This factsheet is hyperlinked to research studies and a great resource to raise awareness.

Le Monde: The deployment of 5G in France is increasingly coming up against ecological concerns

The Shift Project, “Lean ICT: Towards Digital Sobriety: Report on the Environmental Impact of Information and Communication Technologies, February 2019

The Center for Energy Efficient Telecommunications at the University of Melbourne “The Power of Wireless Cloud”, 2013

The Verge Apple ditching chargers saves costs but not the planet

LETTERS TO GRETA BY KATIE SINGER

“I write this letter to you—and to everyone committed to reducing climate change and ecological harms. Without the Internet, I doubt that it would reach you.”Please find all these letters online at https://www.DearGreta.com.letters#1 Dreaming of a Visible Internet Footprint #2 Test Your Internet Footprint IQ #3 Behind Our Screens: An invitation to learn a smartphone’s true costs #4 A geek researches 5G and discovers how he contributes to climate change #5 Proposing Cradle-to-Grave Evaluations for All Vehicles #6 Defining “carbon neutrality” before enacting new policies #7 Green 5G or red alert? #8 A brief history of electricity and telecommunications #9 How to revise our consuming love affair with electronics

The Shift Project, “LEAN ICT: TOWARDS DIGITAL SOBRIETY”: OUR NEW REPORT ON THE ENVIRONMENTAL IMPACT OF ICT” ( 2019)  PDF Summary

Sikdar, “A study of the environmental impact of wired and wireless local area network access,”

Emerging Trends in Electricity Consumption for Consumer ICT, by Peter Corcoran and Anders Andrae of Huawei.

“The Power of Wireless Cloud”, The Center for Energy Efficient Telecommunications, 2013

Donate To Support Us

Not for Profit Organisation

STANZ is a not-for-profit organisation which relies on the good will of its members to run its operations. The only source of funding it currently receives are from donations from members and the public.

STANZ has an elected Coordinating Committee that meets regularly to organise the affairs and activities of the society.

A short video about Mobile radiation, cancer risk and industry lobbying as part of a EU based initiative to stop 5G.

Measurements of radiofrequency electromagnetic fields, including 5G, in the city of Columbia, SC, USA

A number of hotspots were found where cell phone base station antennas were mounted on top of the utility poles and therefore positioned at low levels, close to street level. On the whole, the findings of the present study suggest that cell phone base station antennas should be distinct and noticeable, as this would assist individuals who need to limit their exposure by distancing themselves from RF sources.

One of the world’s leading authorities on wireless radiation has documented the risks of 5G radiation in the first book on that outlines the potential dangers of 5G technology.

Stay Up to Date With The Latest News & Updates

Keep up to date with our quarterly newsletter summarising the most important news, views and campaign actions